Director’s Corner: A Voyage of Discovery 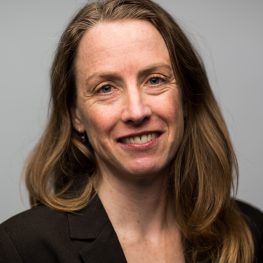 The Climate Impacts Groups’ first grant from the National Oceanic and Atmospheric Science Administration charged the team of scientists with a “voyage of discovery.” 25 years and even more discoveries later, the group at the University of Washington is still on a scientific quest to support climate-smart decision making across the Northwest region.

Setting sail — without a map

When Edward Miles established the Climate Impacts Group in 1995, he wanted to advance the conversation about — and action on — climate.

Miles, University of Washington Professor of Marine Affairs, saw a large gap between the scale of information produced about climate change and the needs of people who could help prepare for climate risks. It may seem obvious now, but at the time, scientists were focused on global climate change. There was little attention on climate impacts science at the local and regional levels, where our responses strongly shape our vulnerability to changes in climate.

In fact, in the mid-90s there were no groups we know of in the U.S. or around the world focused on understanding the importance of climate at a local level. We knew very little about how natural variations in climate affected the Northwest’s resources, ecosystems, infrastructure and more. We knew even less about how human-caused changes in climate would affect those same things.

Though there were no guides for doing this work, we knew from the beginning where we wanted to 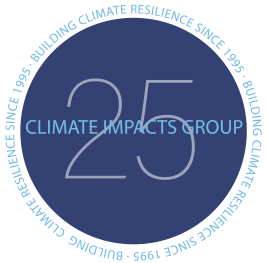 go; we wanted to develop climate information that would be both useful and used. In this spirit, when the National Oceanic and Atmospheric Administration funded our group in 1995, they called our mission a “voyage of discovery.”

The Climate Impacts Group’s early work established how climate shapes life across the Pacific Northwest. Our small team was made up of climate dynamicists, hydrologists, forest and aquatic ecologists, coastal managers, social scientists and lawyers. By studying the consequences of past fluctuations in climate (warmer years, or years with less rain, as examples), we built a foundation of knowledge of how climate affects Northwest communities, economies and ecosystems. We worked with partners to measure the ability of humans to cope with fluctuations in climate through policy or practice. Studied together, this research allowed us to project the likely future consequences of human-caused climate change.

One of our first breakthroughs was the group’s discovery that changes in patterns of rain, snow and snowmelt are the most significant driver of impacts in the Northwest. Broadly, warmer temperatures in winter lead to less snow falling and remaining frozen in the mountains, which then means less water available from mountain snowmelt in the summer. This basic change in hydrology — more water in winter, when we need it less, and less water in summer, when we need it more — is behind several of the biggest risks of a changing climate, including increased risk of flooding in winter; of drought in summer; and of wildfire.

Another major breakthrough for climate resilience across Washington State was spurred by orders from Governor Christine Gregoire and the state legislature. In response to several directives, the Climate Impacts Group developed the first Climate Change Impacts Assessment for the State of Washington, which outlined the projected effects of climate change on water management, forestry, agriculture and more. We also developed, at the request of the legislature, comprehensive data to support long-range water resources planning in the Columbia River Basin.

These efforts provided us with the necessary foundation to assess the risks of climate change across the state. When we released the report at a conference two years later, more than 600 participants from around the state gathered to discuss how to address the findings. It marked a tipping point in the reach of our work.

Since then, we have continued our mission to not only develop scientific understanding of climate in the Northwest, but to enact change in this sphere through education, policy and consultation. We’ve partnered with natural resource managers, engineers, city planners and many others to create dozens of tools that help decision makers prepare for natural and human-caused variations in climate. We’ve led innumerable workshops, presentations, webinars and phone calls to educate people of all backgrounds on climate change. And we’ve normalized the use of climate information in making decisions at the local, regional and national level.

Thanks in part to our work, public and private water utilities across the region now incorporate climate information into their planning. The cities of Portland and Tualatin, Oregon, as well as Seattle, are just a few of the utilities who have used our science to prepare for a changing climate. At the federal level, the U.S. Forest Service, the U.S. Fish & Wildlife Service and other resource management agencies have worked with us to provide training on climate impacts to their staff, study the impacts of climate on key resources and develop strategies for adapting to climate change.

The structure and mission of our organization as well as our research and approach to our work have served as a model for similar groups across the country. What was seen as novel in 1995 is now understood to be necessary.

The discoveries, breakthroughs and impacts from this work are due not only to Edward Miles’ vision and prescience, but to the creativity, innovation and commitment of the people who have worked here and with whom we have partnered over the years. We owe a tremendous amount to those early voyagers whose work I’ve (partially!) described here.

25 years and counting: Looking to the future of regional climate resilience

This year we are planning a series of virtual lectures and events to bring together Climate Impacts Group team members past and present, partners and collaborators and supporters and friends to celebrate 25 years of building climate resilience.

Our first lecture, to be held December 3, will reflect further on past successes in building climate resilience, progress we’ve made across the region and where there’s still work to be done.

Upcoming on the Director’s Corner blog, I will focus on our present and future — what we’re doing now and what we need to do to prepare for the effects of climate change. The second and third lectures in our series, to be held January 27, 2021 and March 30, 2021, will do the same.

When talking about our present and future, you can expect me to be completely frank about our circumstances. Because when I look around the Northwest and think about what is in store for us all as a result of climate change, I am both hopeful and deeply concerned.

I am hopeful because we now have a tremendous depth of scientific and practical knowledge about local climate risks and vulnerabilities. I am hopeful because there are a lot of engaged professionals applying this knowledge to address climate issues. This marks progress that would have been difficult to imagine 25 years ago, when we first set off on a voyage of scientific discovery.

But I am concerned because we don’t have the widespread attention to this issue that is needed, or the deep recognition that time is short to prepare for the changes underway. We don’t yet feel the urgency that’s needed to drive real change to address the climate risks we face.

So let’s celebrate how far we’ve come and rise to the remaining challenge. Let’s link the knowledge we have about climate risks with the action necessary to reduce those risks. Let’s mobilize across sectors, geographies and communities to build a climate-resilient Northwest. The time for action is now.