Feeling Hot, Hot, Hot: How the Summer Heat Can Get You Down

Update [8/18/16]: An excessive heat warning is in effect for Western Washington from Thursday, August 18 through Saturday, August 20. Please check out the resources for coping with extreme heat from Seattle-King County Public Health and from the Washington State Department of Health. For those in Seattle, a list of cooling centers is available here.

As the mercury rises in Western Washington this weekend, some folks may be wishing for air conditioning. Even though this summer is not nearly as hot as last summer, we have had some bouts of heat earlier in the year, with nine days in April and May at 80 °F or above at SeaTac Airport. While these temperatures aren’t considered extreme, they were much higher than normal for that early in the spring. So what are some of the downsides of extreme summer heat? And should we expect more of it this summer?

We all know that hot weather is uncomfortable, but did you know that it can actually be harmful to your health too? Recent research shows that heat waves can increase the number of hospitalizations and the number of emergency calls in Western Washington. The high temperatures put extra stress on the body that can lead to health problems. Anyone can experience these negative health impacts, but certain groups of people are more susceptible than others. Children, the elderly, and those with pre-existing medical conditions, like diabetes, are especially at risk. Low-income individuals and people who work outside can also be disproportionately affected.

Hot summer days also increase the risk of a variety of illness, including heat exhaustion, heat stroke, and heart attacks.

High temperatures can affect human health in other more indirect ways. Warmer temperatures exacerbate respiratory problems that are connected to air pollution or allergens. The lengthening of the warm season can threaten water quality and make conditions more favorable for harmful algal blooms. When high heat is accompanied by dry summer conditions, pollutants in water supplies can become more concentrated, also posing a health risk. Also, during hot, dry summers, fire risks can grow, which can threaten people’s homes and businesses directly and compromise air quality. Many of these health issues were on display in 2015 across the state.

2015 was the hottest year on record in the state, with several significant heat waves occurring during the summer. The whole state experienced temperatures much hotter than average (Figure 1). Between June and August in Seattle, there were 12 days at 90 °F or hotter, and new daily temperature records were matched or set on 10 days. There were also 15 consecutive days over 80 °F in late June to early July and 47 days with a high at or above 80 °F (Figure 2). The record-breaking heat was not just in the Puget Sound – Spokane also broke several local temperature records, including July 27th where thermometers hit 105 °F, making it the fourth hottest day ever there (Figure 3). On June 28th, Walla Walla hit 113 °F, setting the record for being the hottest June day reported in all of Washington. All across the state, records for high temperatures were set in a series of multiple-day heat waves.

Could We Be in Store for More Heat?

Although we don’t have a forecast for the timing or intensity of a heatwave 60-90 days in advance, we can estimate the odds for hotter-than-average months. Figure 4 shows the monthly forecast for Washington and the greater Pacific Northwest for August 2016. For the region, the odds are tilted slightly towards warmer-than-average temperatures (light orange color). Figure 5 depicts the seasonal forecast for August-October 2016. The dark orange color indicates that for Washington, as well as the continental United States, the odds are tilted towards warmer-than-average temperatures. 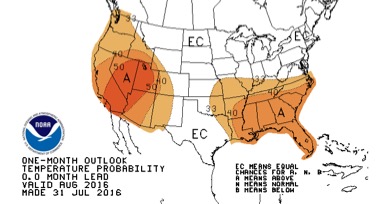 Looking Toward the Future

We expect climate change to increase average temperatures in the future, as well as the frequency and intensity of heatwaves in Western Washington. With greater heat comes greater health risk. And without further changes in the health care system, this could lead to greater mortality. For example, recent research shows that days of extreme heat in King County (about 4 days per year for the 2002-2006 period) could become 2 to 7 times more frequent by the mid-21st century. This projected warming would result in 30 to 170 additional heat-related deaths, with most of those occurring among people over the age of 85. This is a big increase – for 2002-2006, King County averaged approximately 7 annual heat-related deaths.

Many county and state agencies recognize the need to better plan and prepare for current and future heat waves. Several have created guides and tips for people to keep their families safe and healthy in the heat.

To learn more about climate change in the Puget Sound region and the link between climate change and health, check out the Climate Impact Group’s recent State of Knowledge Report.