Why an Adaptation Plan for the Nooksack Indian Tribe? 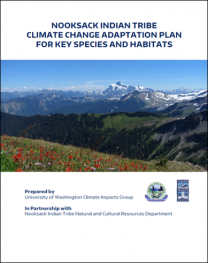 Recognizing the impacts climate change poses to the Nooksack Indian Tribe, the Tribe’s Natural and Cultural Resources Department is engaged in an on-going process to prepare for risks to Tribally important fish, wildlife and habitats. Building off the Tribe’s vulnerability assessment, completed in 2017, this plan represents the critical next step in the adaptation planning process: identifying actions to guide the Tribe’s efforts to increase the climate resilience of priority natural and cultural resources. This plan was developed for Water Resources Inventory Area 1, which encompasses the Nooksack River watershed and associated marine tributaries, a total area of 1,410 square miles (>900,000 acres).

How is climate change expected to affect species and habitats of importance to the Nooksack Indian Tribe?

Western Washington is projected to warm rapidly throughout the 21st century. Increasing temperatures are projected across all seasons, with the greatest warming occurring during the summer. Projected changes in annual precipitation are small compared to year-to-year variability, however, heavy precipitation events are projected to increase in frequency and magnitude.

During three, day-long workshops, land and wildlife management stakeholders within the Nooksack watershed (including Nooksack Indian Tribe, Whatcom County, Whatcom Land Trust, Evergreen Land Trust, WA Department of Natural Resources, WA Department of Fish and Wildlife, U.S. Forest Service, Sierra Pacific Industries, Natural Systems Design; and the Stillaguamish Tribe of Indians) evaluated, selected, and prioritized more than 200 potential adaptation actions compiled by the University of Washington Climate Impacts Group from the scientific literature and existing adaptation plans. Stakeholders refined the list to the higher-priority adaptation actions included in this plan. During review of the results of the workshops and subsequent consultation, the Tribe and collaborators added some additional actions where gaps were identified, and/or modified descriptions of actions to clarify application and relevance. 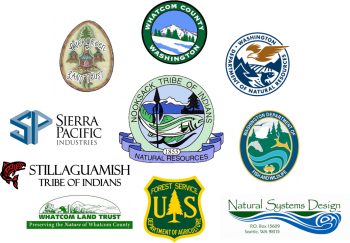 The Nooksack Indian Tribe’s Climate Change Adaptation Plan includes 140 high-priority adaptation actions that, if implemented, are expected to increase the climate resilience of the priority species and habitats addressed in this plan. Actions are grouped according to the timeframe anticipated for progress.

A wide range of actions will be needed to prepare the Tribe for climate change and to promote species and habitat resilience in the face of climate stressors.

Funding for this effort was provided by the Bureau of Indian Affairs.