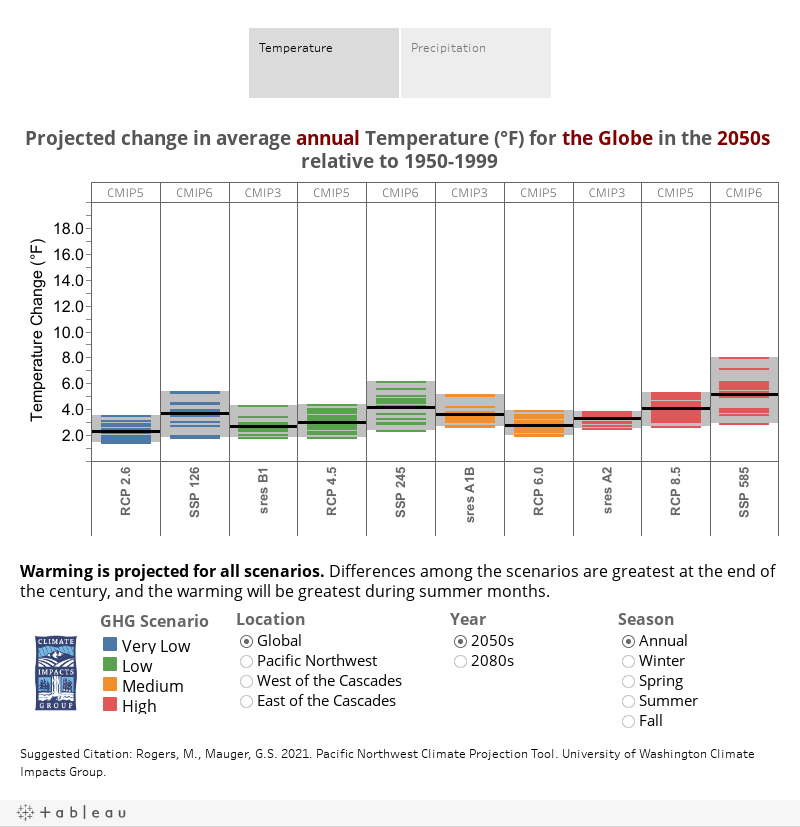 How to use this tool

What is a global climate model? Global climate models simulate the interactions between the atmosphere, ocean and land to project future climate, based on potential future emission scenarios of greenhouse gases. Among other conditions, these models estimate future changes in temperature and precipitation.

What is the Coupled Model Intercomparison Project? The Coupled Model Intercomparison Project (CMIP) is an initiative by the World Climate Research Programme (WCRP) to facilitate comparison of GCM simulations. The WCRP sets standards for the simulations of the more than 30 groups that are involved with the CMIP project, so that the GCM simulations of all of these groups can be analyzed collectively. The most recent phase of the CMIP is phase 6, which is currently being released. This is a publicly-available archive of climate model simulations from what will eventually be several dozen modeling groups. These groups produced simulations using the same set of future scenarios, along with other common assumptions which allow for the comparison of projections across all models and scenarios. Read more about climate models on the CMIP6 site.

Greenhouse gas scenarios are formed by inputting possible future emissions, population growth, technological advances etc. into Global Climate Model simulations. The most recent scenarios are called Shared Socioeconomic Pathways. The three numbers following each Pathway detail a plausible trend in the evolution of society over the 21st century and the strength of the greenhouse effect by 2100. The first number corresponds to the evolutionary trend, which relates potential barriers to climate change mitigation or adaptation without explicitly considering climate change itself. In general, larger values indicates larger challenges. The final two numbers following each Pathway relates to the magnitude of the greenhouse effect, which corresponds to the amount of energy, in watts per square meter (W/m2), that is absorbed by the earth’s climate by the year 2100. If future greenhouse gas emissions decrease rapidly over the coming decades, this energy imbalance could be as low as 2.6 W/m2 by 2100 (SSP 126). Alternatively, if emissions continue to accelerate, this could reach 8.5 W/m2 by 2100 (SSP 585). More information on greenhouse gas scenarios can be found in the first chapter of the Puget Sound State of Knowledge Climate Report.

The CMIP6 experiment is the latest set of global model projections. Many previous climate impacts assessments in the Pacific Northwest are based on the previous CMIP3 and CMIP5 GCM projections, which are shown here as well. The newer CMIP6 projections are very similar to those of the older CMIP3 and CMIP5 models — with the caveat that some CMIP6 models include unrealistic warming. Excluding this, most of the differences are due to different assumptions about future greenhouse gas emissions.