Climate change is projected to lead to more frequent and severe flooding in response to sea level rise, declining snowpack, and heavier rain events. Most studies of future flood risk have focused on quantifying the amount of sea level rise, or the increase in streamflow during flood events, and have stop short of evaluating which areas are flooded and at what depth. The few studies that have modeled the extent and depth of future flooding (e.g., Hamman et al., 2016; Mauger and Lee, 2014) are limited in spatial coverage and are not easily comparable due to differences in the data and methods used. The purpose of this project was to pilot a new inexpensive approach to developing a consistent set of flood projections over a much larger area. This allows for apples-to-apples comparisons of risk.

We quantified changes in the depth and extent of flooding for all but the uppermost reaches of the Snohomish and Stillaguamish watersheds. We developed the streamflow and sea level rise projections needed as input to the hydraulic model simulations, in both cases using the latest comprehensive set of projections for the region, and worked with consultants at Fathom, Ltd. to evaluate and optimize the flood simulations. In addition, we evaluated streamflow and sea level rise projections for use in a separate study of groundwater variations in the lower elevations of each basin. This project was conducted between June 2017 and June 2018.

This project was managed by the Snohomish Conservation District, with funding from the NOAA Community Based Restoration Program, the Estuary and Salmon Restoration Program (Grant #17-1308P), and the Stillaguamish River Lead Entity Capacity Fund. 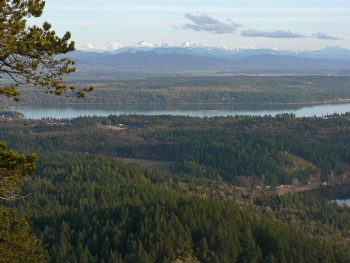