These two interactive Tableau data visualizations help users query, visualize and compare the latest projections for sea level rise out to the year 2150 from Miller et al. 2018. These tools are designed for direct application to risk management and planning in Washington state.

The sea level projections are locally-specific — data are provided for 171 locations along Washington’s coastline, accounting for the geographic variability in vertical movement of the land surface across Washington state. The projections are probabilistic — they describe a full range of likelihoods of future sea level changes for a given greenhouse gas scenario over time.

For more information about the projections, and for extensive documentation on the methodology used, please read the project report and associated appendices. 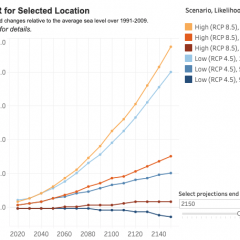 About the Data Visualizations

There are two different ways to visualize the relative sea level projections for Washington state.

We've produced two different ways to visualize the Washington state 2018 relative sea level rise (RSLR) projections. Both allow users to explore how the projections change over time (2020-2150) for over 171 distinct locations along the Washington coast. 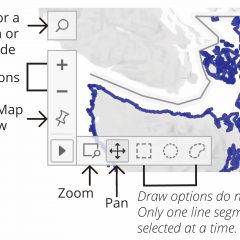 Learn some handy tips for using and navigating the data visualizations.

Have a question about what is displayed or how to use these Tableau data visualizations? Read our quick tips and tricks for using these data visualizations. Or, watch the 20-minute webinar with Harriet Morgan, "Visualizing Washington’s Sea Level Rise Projections."
Download the How to Use Info SheetWatch the webinar 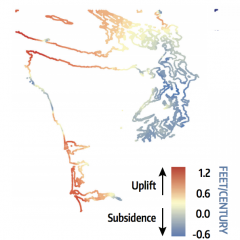 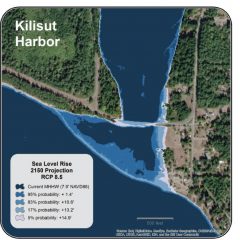 What other coastal hazards should be considered in planning?

The Miller et al. (2018) projections describe potential changes in the long-term average relative sea level (i.e., over multiple years or decades), relative to the contemporary sea level (defined as average sea level between 1991-2009). Short-term water level variability – e.g., due to storms, El Niño, and other processes – can temporarily add to or reduce the rate of sea level change, and will continue to do so into the future. If there is a subduction zone earthquake parts of Washington’s coastline may be subject to a sudden, additional land level change which is not factored into relative sea level rise projections. Coastal subsidence during such an event would have the effect of raising local relative sea level.

VISUALIZATION #2: Likelihood of a given sea level change by year

The project was funded by an EarthLab Innovation Grant with support from Tableau and Seattle Public Utilities. Additional support was provided by the Climate Impacts Group’s Science Communication Fund. Paige Lavin, a Program on Climate Change (PCC) capstone student, was instrumental in the development of these data visualizations.

Questions can be directed to Harriet Morgan