This visualization tool enables users to explore and download climate change projections and climate change summaries for priority geographies at the scale of tribal decision-making.

Global climate models (GCMs) are designed to represent the processes controlling Earth’s climate. These models incorporate the state-of-the-art in climate science. As a result, they are periodically updated as the science progresses.

It is important to consider a range of projections among multiple different climate models. Each model simulates the earth’s climate using a different set of approaches. As a result, each model provides a unique estimate of the response of the climate to greenhouse gasses in the atmosphere. In addition, the timing and sequence of natural climatic variability is unpredictable, and is therefore unique for each climate model simulation. For example, all models represent the El Nino Southern Oscillation, but El Nino and La Nina events occur in different years and sequences in the different models. For a given amount of greenhouse gas emissions, the range among climate model projections encompasses both the variability due to different climate models, as well as natural variability. There is no single “best” global climate model, so a recommended approach is to use multiple models to assess potential changes in the climate.

The range among climate model projections may not encompass the full range of potential future climate changes. The range of climate projections among models provides an estimate of the uncertainty in projections. However, we cannot rule out the possibility that future changes in climate will be outside of the range projected by climate models.

Global climate models simulate future climate for the globe at a resolution or scale that is too large to be useful for regional- or local-scale applications.

A process known as “downscaling” increases the detail, or precision, of global-scale climate projections to provide information that is more relevant to regional and local management or operations. There are different approaches to downscaling, each with their own strengths and weaknesses. No single downscaling approach is superior. A statistical downscaling approach is used for the climate data available in the Tribal Climate Tool.

How to Use and Interpret Results from the Tool

The projections in this tool should be used to interpret trends across geographic regions, not specific locations (e.g., specific buildings or roads). While downscaling global climate models enables us to better understand the projected changes in climate across smaller spatial scales (e.g., across states or watersheds), constraints on the use of downscaled climate data do exist.  There are limitations and spatial gaps in the historical climate observations used to downscale the data.  For example, limited measurements of historical temperatures at high elevations makes the data less reliable at high elevations. As a result, the projections provided in this tool are best used to interpret trends in climate across relatively large geographic areas, such as watersheds, or for areas that are relatively similar in terms of geography and historical climate.  Projected changes in climate trends for a specific location within your tribe’s preferred geography should be interpreted with caution given the known limitations of downscaling global climate projections.

The climate variables in the Tribal Tool are presented for three time periods in the 21st century:

Climate projections take a longer-term view to and are often centered around thirty-year averages. This longer time window enables climate models to capture interannual and decadal patterns of natural variability in the climate system (e.g., ENSO and the Pacific Decadal Oscillation). 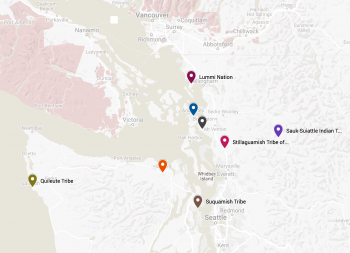 This map provides a geographic reference for assessments and videos highlighted on this site. 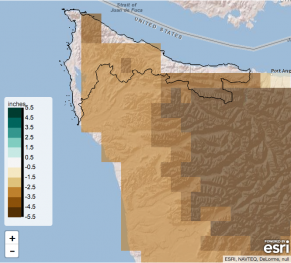 Explore how climate may change for your Tribe.